The Behind the Story Blog: EnCompass Magazine Cover Shoot 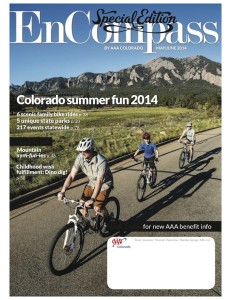 I consider myself a storyteller. And while words are my natural medium, I’ve become increasingly interested in visual storytelling, through video and photo. So when Tom Hess, the editor of EnCompass magazine, asked if I’d be interested in producing the cover for the May issue, I jumped at the chance.

The requirements were pretty straightforward. I had written the feature cover story on great bike rides to do in Colorado for all ages and ability levels. Tom was hoping for a cover shot that showed a family riding bikes on a road with mountains in the background. The tricky part was shooting in March and making it look like a summer landscape.

I spoke to several photographers and decided to go with John Lloyd, who had work samples proving he could execute the polished commercial look were were hoping to get, while still using natural light. Perhaps even more importantly, he had an enthusiasm level that matched my own, and didn’t seem fazed by the fact that there was still tons of snow in the mountains (not exactly a summer scene).

We decided to shoot in Boulder to minimize the snow and outfit our models in Club Ride cycling apparel. The clothes are smart and urban and designed to cross over from the trail to the coffee shop. Our model family, Brian, Jess, and Jackson Strickland, have an edgy look, with Brian’s tattoos and Jess’s cropped blonde hair, and we wanted to play that up.

Here’s how it went down (special thanks to Jean-Francois Hardy for making this video):

← The Behind the Story Blog: Where’s Jayme?
How To Become a Professional Travel Writer : Zero To Travel Podcast →